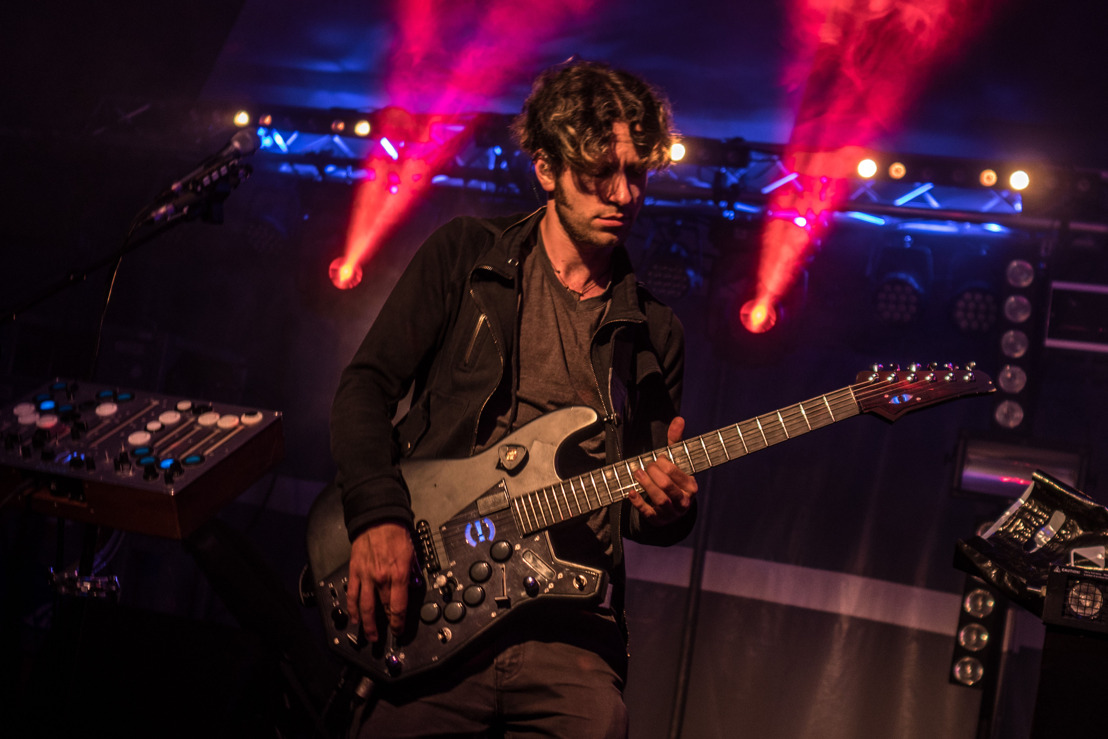 San Francisco, CA, March 7, 2022 -  Few artists can alternate between riffing on a guitar, creating wild digital manipulations on a custom controller, and designing and building interactive gadgets as seamlessly as Bay Area-based artist Moldover does. It all goes back to his unique artistic trajectory. ”I come from the more conventional background of playing in bands with other humans,” he says. “I found myself getting frustrated with the complexity of band social dynamics, so I struck out on my own and started using machines and software instead of humans, and that's where things really clicked for me. It turns out I’m better with tech than with bass players.” Inspired by artists like Aphex Twin and Squarepusher, Moldover began to blend his love of live instruments with computer-based production elements. “The technical side of music is part of what makes today’s music so interesting,” he says. “There’s so much to explore.” As part of his explorations, Moldover uncovered the unique capabilities of Polyverse plug-ins and began to cultivate a unique new sound.

Playing the plug-ins
​As he transitioned to utilizing more digital tools in his productions, Moldover was careful not to lose sight of what he loved best about conventional instruments. “I love software, but I also want something human, something I can touch and feel,” he says. “That's why controllers became really central to what I do.” He began to build custom controllers for himself that allowed easy access to plug-in parameters even when holding a guitar or playing a keyboard, and has since built a reputation as an in-demand controller and audio rig designer for other musicians as well. But to effectively leverage the power of his controllers, Moldover needed plug-ins capable of attention-grabbing audio manipulations without introducing excessive latency. This led to his discovery of Polyverse’s I Wish pitch-freezing plug-in.

“I Wish could do such interesting, tweaky stuff, which piqued my interest right away,” he says. “I was familiar with vocoding and other ways of Integrating two separate audio signals, but this took that to a new level. You have to dig in and get imaginative to get the most out of it, and that was really exciting to me. The depth is just incredible. You can do a million things with it that have never been done before.” His experience with I Wish made Moldover eager to see what else Polyverse had in store. “I could see that Polyverse was creating tools that were deeper and more powerful than so much of what was out there,” he adds.

Far out vocals
​The next stop on Moldover’s Polyverse journey was Manipulator, a powerful granular pitch-shifting plug-in. “When Polyverse released Manipulator, I got really excited because vocals are a crucial component of the music I make both as a songwriter and a producer for other artists,” he says. “You can use Manipulator on all kinds of pitched sound sources of course, but Polyverse clearly had vocals in mind with Manipulator. You can create such cool, unique, and powerful vocal sounds with it.”

For Moldover, Manipulator made pitch and formant shifting–processes notorious for their CPU intensiveness–faster and more versatile than ever before. “To be able to take a controller and hook it up to Manipulator and have all that wacky sound bending with almost no latency was revolutionary,” he says. “That was like the holy grail. You couldn't get that level of performance in a plug-in before Manipulator.  There's some crazy programming under the hood there.”

Faster, stronger, better
​Moldover notes his appreciation of Polyverse’s ability to take complicated and often tedious processes in contemporary production and streamline them with their plug-ins. One such example is the morphing feature embedded in Polyverse’s Comet reverb plug-in. “Comet’s ability to morph between settings was a huge revelation for me,” he says. “I had experimented with having reverbs move through different spaces and morph around the music over the course of a song in the past, but it had been hard to find a plug-in reverb that would allow that kind of automation, and even when I did it was a nightmare to actually draw it in. Then Comet comes along and lets you press a few buttons and it morphs seamlessly at whatever rate you set. I wish it had existed 10 years ago!”

Of course this functionality would be no use without a great reverb sound, and Moldover finds Comet among the best-sounding reverbs on the market. “Having a good-sounding reverb is so critical,” he says. “Comet sounds fantastic, it’s super easy to dial in, and like everything Polyverse designs it doesn’t destroy your CPU. I’ll definitely be exploring it even more in-depth on my next album.”

Opening the gates
​One Polyerse plug-in that Moldover hasn’t yet explored in depth yet but has piqued his interest is the company’s Gatekeeper volume and gating plug-in. “I’m excited to tap more of Gatekeeper’s potential because everything it does is exactly the kind of stuff that I love to do–gating and chopping and all that,” he says. “I used to draw all kinds of automation by hand to do that sort of thing, and to have it in an elegant plug-in interface like that opens all kinds of doors. It’s ripe for exploration on the next album for sure.”

For Moldover, Gatekeeper epitomizes Polyverse’s approach to plug-in design. “Polyverse is so good at turning complicated and difficult aspects of production into something you can actually play intuitively,” he says. “And their plug-ins always have this incredible depth, with all kinds of powerful features hiding really elegantly just beneath the surface. Whenever I go looking for a feature it’s there, and then some!”

Technology that excites
​Moldover just released a remastered edition of his self-titled debut album, and in his trademark fashion there was a unique method of delivery. “There’s a version of Moldover REMASTERED on a physical CD, but the CD case has a little light-based theremin built right into it,” he says. “So you can actually play the packaging.” It’s this playful approach to music creation that not only excites his audience, but keeps him invested in the music he creates. “I’m always trying to combine the emotional side of a performance with the technical side of production and some unexpected elements–that’s what really makes music interesting for me.” He notes that Polyverse plug-ins have helped stimulate his musical imagination. “Polyverse plug-ins are an example of the kind of technology that excites me now in the way that traditional music did when I was a little kid. They really spark my imagination.”